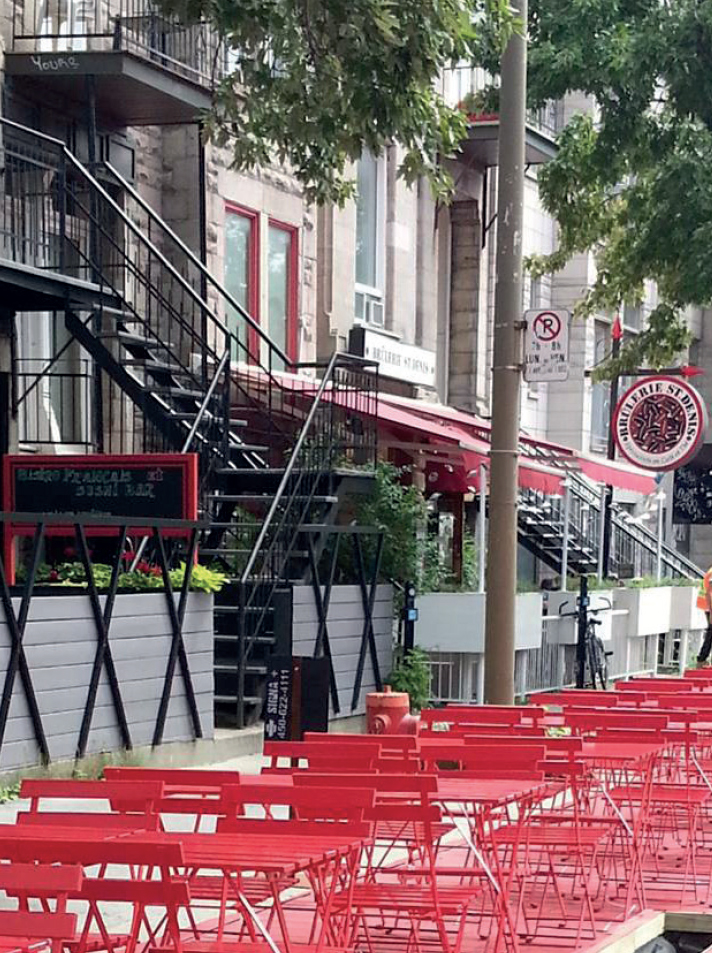 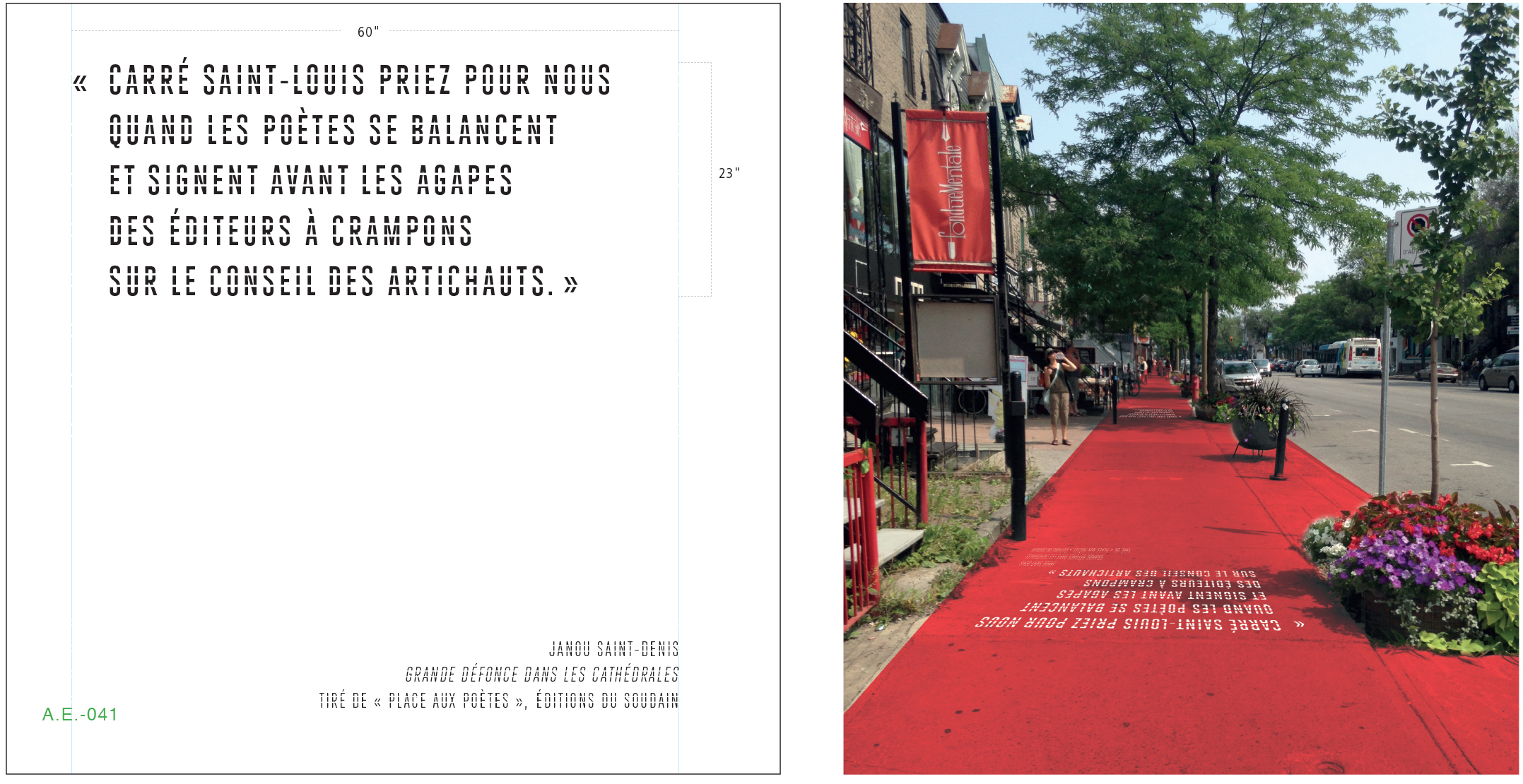 We first approached the store owner association of Saint-Denis street, an historical commercial street in difficult times, to offer our help to design a solution to help them go through the challenges of the upcoming major roadwork aiming to replace a 1880's underground waterpipe. Together we united efforts with the City of Montreal and the neighborhood leaders, to devise a project that would serve as an exploratory project to better the urban spaces surrounding a construction site, in it's different phases.

Integral Jean Beaudoin received the task, from City of Montreal, to design , prepare construction drawings and oversee installation of this urgent project.

All agreed that doing nothing, and keeping the current state of the street or the current construction signage and protection was not an option.

Further, as urban designers, we were convinced that the solution is not a decorative approach to construction site fences. We had to rethink both the area of intervention as well as the calendar of intervention.

Thus, the area of the project was extended beyond the limits of the construction site to include the approach to the site. This enable to consider street areas that are also impacted by the construction work and its noise and lower attractability, but also create a connection to two main places of the neighbourhood, Mont-Royal as the main street and metro station to the north, and Carré Saint-Louis and its Sherbrooke Metro to the south.

As for the calendar, we included in the project a pre-construction and a post construction festivity, that will enable to create a unique attractive urban space prior to the spring 2016 major work, and also state strongly the end of the work in autumn 2016.


The "Red Boardwalk project" is an evolving urban space, comprised of city owned decks, furniture and signage, that will mutate during the different stage of the reconstruction, including a pre-construction event and a post-construction festivity.

PHASE 1 THE RED BOARDWALK - AUTUMN 2015
The first stage, now open to the public and officials launched by the mayor of Montreal Denis Coderre on the 31st of August, is the
1KM RED BOARDWALK.

All componants were prepared of site and were installed in just 8 days during august, over 4 weeks to preserve the animation over the summer weekends.

250 red decks were installed along one kilometre, from Roy street to Mont-Royal street, to more than double the sidewalk width. Echoing the memory of Saint-Denis as the "Terrasse street of Montreal", the installation boldly reclaims this status.

More than 1000 seating furnitures, 250 tables, sandboxes, play areas, flower boxes, bike supports, orientation tables are distributed along the kilometre, to invite vsitors to stop "in the street" that was before to much dedicated to transit traffic or "non-stopping" .

In the construction area, where the side walk and street surface will be rebuild completely, the surface was " completely tattooed'' by red paint and with lines to create a unified area and atypic streetscape. 50 artist and writer of the neighbourhood were quoted in painted sentences that create a rhythm for a walk on the red boardwalk.

"Learning from successful shopping centres", a map and directory of the stores and services of the street is now installed on each corner to inform the visitor of this exceptional density of commercial activity ( equal in number to Dix30 the largest suburban shopping center ).

A "skyscape" made of poetic reference to the street activity of the area, was installed on real Plane banners to create typographic shades in the street as well as a unifying canopy for the area.

PHASE 2 THE TWIN RED PLAZAS - SPRING 2016
During the spring construction work, where 4 car lanes will be closed, the 250 red deck will migrate at the start and and of the site to create two unique temporary plaza in the middle of the closed part of the street. Greeting the visitors in the area and inviting them to climb to an observatory of the construction site on axis of the street.
The 500 meter long fence of securing the perimeter of the site will be invested by a long sequence of 200 paintings by Montreal artist which were painted during an event in the RED BOARDWALK event. Each painting attached to the preceding and following one.

PHASE 3 THE TWIN RED PLAZAS -SUMMER 2016
In the summer 2016, the two plazas will move to the west to enable work on the other side of the street.

PHASE 4 THE RED BOARDWALK -AUTOUN 2016
The RED boardwalk will be temporary installed to celebrate the end of the construction and reopening of Saint-Denis Street.


As 80% of the components are reusable, upon the foreseen success of the new construction site landscape management and design, the city will be able to reinstall the RED BOARDWALK, and its twin RED PLAZAS, in other commercial street that will have to undergo repairs.

Echoing the festival that makes montreal urban spaces unique, the RED BOARDWALK project is building on the expertise of temporary installation of Montrealers, to take charge, from now on, the very critical urban moments of mutation that are construction work in commercial streets.

We thank the City of Montreal, its mayor Coderre and elected head of road installation mister Perez, the neighbourhood mayor Ferrandez and councillor Marie Plourde, the Store owner Association and the very enthusiastic contractor, for their thrust in our team and in their commitment to DESIGN as an essential part of increasing the quality of spaces , and life, in our City.

Contractor of all phases of the infrastructure and Red boardwalk installation+transformation : Michaudville

Public space animation of the installation, prior to construction ( august to november 2015 ) : L'estrade.